You Can't Spell Truth Without Ruth: An Unauthorized Collection of Witty & Wise Quotes from the Queen of Supreme, Ruth Bader Ginsburg (Hardcover) 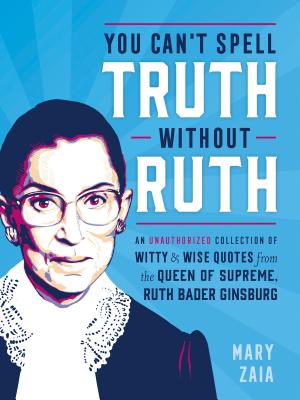 You Can't Spell Truth Without Ruth: An Unauthorized Collection of Witty & Wise Quotes from the Queen of Supreme, Ruth Bader Ginsburg (Hardcover)

Speaking the Ruth to America

Ruth Bader Ginsburg became a Supreme Court Justice in 1993, but her popularity has exploded over the last couple of years as she has been adopted as a modern feminist icon. An octogenarian who has proven that disagreeing does not make one disagreeable, Ginsburg is well-known for her pithy observations as well as her strongly argued dissents. Beloved by many – including her ideological opposition, former Supreme Court Justice Antonin Scalia, who was her dear friend – Ginsburg’s wisdom has never been more relevant or more important to American democracy.

“Women belong in all places where decisions are being made…it shouldn’t be that women are the exception.”

“Fight for the things you care about, but do it in a way that will lead others to join you.”

“People ask me sometimes…When will there be enough women on the Court? And I say, ‘When there are nine.’ People are shocked. But there’d been nine men, and nobody’s ever raised a question about that.”

“My mother told me two things constantly. One was to be a lady and the other was to be independent. For most girls growing up in the ‘40s, the most important degree was not your B.A. but your M.R.S.”

“We have the oldest written constitution still in force in the world, and it starts out with three words, ‘We, the people.’”