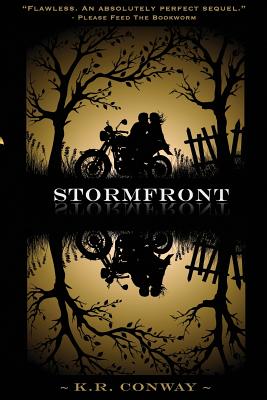 
On Our Shelves Now
This book cannot be returned due to publisher restrictions.

— From Signed Books
Second book in the UNDERTOW SERIES by KR Conway Not long ago Eila Walker's choices were limited: death by a bullet to the head, or at the hands of her beloved bodyguard, Raef. Now, five weeks after Raef triggered her power and she nearly leveled a historic mansion, Eila is dealing with the fall-out of her decisions. While she doesn't remember dying in the arms of the soul thief who loves her, she knows that Raef remembers everything about the night he nearly killed her. Now on the mend and attempting to keep one step ahead of the FBI, Eila and her team of misfits are desperate for a bit of normal. Eila is trying to navigate high school, while her BFF Ana is cautiously hanging with past-boyfriend and soul thief, Kian. Shape-shifter, MJ, is trying not to piss off his mother, while Raef is coping with his fears that Eila will never be safe. But just as "normal" seems within their grasp, a powerfully built newcomer arrives. Raef knows the scarred man as a Blacklist Dealer - a soul thief, who peddles the names of humans who deserve to die. Eila, however, knows him as the protective hunter from the woods, who she nicknames Thor. Before long, Raef and Eila realize they've met the same killer, and he has one hell of a story to tell the five friends . . . if Raef doesn't murder him first.