Rose Petal Jam: Recipes and Stories from a Summer in Poland (Hardcover) 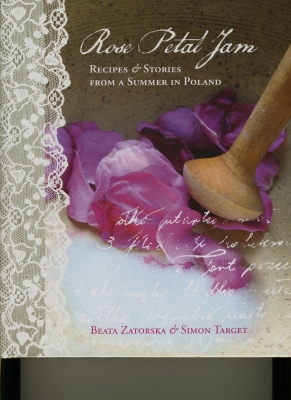 Rose Petal Jam: Recipes and Stories from a Summer in Poland (Hardcover)

Part memoir and part travelogue, this unique cookbook that the story of Beata Zatorska's childhood in rural Poland, mixing stories of her youth and her grandmother’s handwritten recipes with stunning photos of Poland in summer. Included are more than 60 recipes for traditional Polish home cooked meals, from poppyseed cake and pierogi to fruit-flavored summer liqueurs. The photography—ranging across locales such as Warsaw, Poznan, the Tatra Mountains, and the Baltic Sea—showcases the Polish landscape and its influence on the country’s distinct cuisine.

Beata Zatorska was raised in a remote village in rural Poland and emigrated to Australia when she was 19. She has been a family doctor for more than 20 years. Simon Target has written and directed award-winning television documentaries and directed numerous television food shows with chefs such as Curtis Stone, Rick Stein, and Donna Hay.

“A magical book, full of warmth and charm.”  —Sunday Telegraph

“A priceless gift and cookery guide for Polish migrants and cooking enthusiasts worldwide, but also a precious guide to Poland and Polish culture.”  —Polish Times

“From fold-out endpapers featuring colorful, folksy textiles, to the lace overprint on the front cover, the textures are so rich they almost render the experience three dimensional. Rose Petal Jam is at once evocative, enlightening and compelling.”  —Foodtripper

"In addition to being a serious cookbook with more than 50 Polish recipes (from pierogi to poppy-seed cake) taken from Beata's grandmother's handwritten notes, as miraculously preserved as preserves, Rose Petal Jam is also part memoir and part travelogue, the story of Beata's idyllic childhood in the rural Karkonosze Mountains and her later day adventurous travels with Simon in Poland today. But there's more. Rose Petal Jam's cover took my breath away with an exquisite photograph of rose petals, sugar crystals and a wooden pestle. (Simon's mother is the Australian landscape painter Pat Prentice. The photography in this book is numbingly beautiful; No doubt in my mind that Simon has his mother's eye.)"  —Charlotte Safavi, Huffington Post