The Making of a Chef: Mastering Heat at the Culinary Institute of America (Paperback) 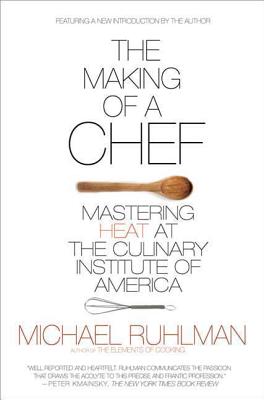 The Making of a Chef: Mastering Heat at the Culinary Institute of America (Paperback)

"Well reported and heartfelt, Ruhlman communicates the passion that draws the acolyte to this precise and frantic profession."—The New York Times Book Review

Just over a decade ago, journalist Michael Ruhlman donned a chef's jacket and houndstooth-check pants to join the students at the Culinary Institute of America, the country's oldest and most influential cooking school. But The Making of a Chef is not just about holding a knife or slicing an onion; it's also about the nature and spirit of being a professional cook and the people who enter the profession. As Ruhlman—now an expert on the fundamentals of cooking—recounts his growing mastery of the skills of his adopted profession, he propels himself and his readers through a score of kitchens and classrooms in search of the elusive, unnameable elements of great food.

Incisively reported, with an insider's passion and attention to detail, The Making of a Chef remains the most vivid and compelling memoir of a professional culinary education on record.

Michael Ruhlman is the author of more than a dozen books, including The Making of a Chef, The Elements of Cooking and The French Laundry Cookbook. He lives in Cleveland with his wife, daughter, and son and is a frequent contributor to The New York Times and Gourmet.
"Any reader who has ever wondered what it's like to be at the center of the cooking maelstrom of a fine restaurant will feel as hurried, harried, sweaty and ultimately as satisfied as a line cook at the end of a long shift with no complaints from the customers." —The New York Times