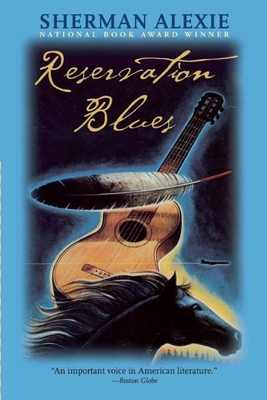 “In this award-winning novel, Alexie resurrects the legend of Robert Johnson, the guitar player who sold his soul to the devil, and brings him and his infamous instrument to a Spokane reservation, where they set off a series of tragicomic events. With its magical realism and remarkable characters, this novel offers a lot of material for discussion, both on style and subject.”
— Dana Schulz, Snowbound Books, Marquette, MI

Sherman Alexie has been hailed as "one of the best writers we have" (The Nation). Reservation Blues is his "irresistibly stunning debut novel" (San Francisco Chronicle).

One day legendary bluesman Robert Johnson appears on the Spokane Indian reservation, in flight from the devil and presumed long dead. When he passes his enchanted instrument to Thomas-Builds-the-Fire--storyteller, misfit, and musician--a magical odyssey begins that will take them from reservation bars to small-town taverns, from the cement trails of Seattle to the concrete canyons of Manhattan. This is a fresh, luxuriantly comic tale of power, tragedy, and redemption among contemporary Native Americans.

The mystical complexity of Reservation Blues is as mesmerizing as the poetic power of Alexie’s writing. . . . Generously laced with bleak and sometimes wacky humor, but none of that detracts from the book’s poignant theme.” San Francisco Chronicle

Quiet, powerfulbrilliant, deeply moving[Sherman Alexie] is funny, he is perceptive, and he knows how to stir us in large and small ways.” Frederick Busch, The New York Times Book Review

An important voice in American literature.” The Boston Globe