The Great British Baking Show: A Bake for All Seasons (Hardcover) 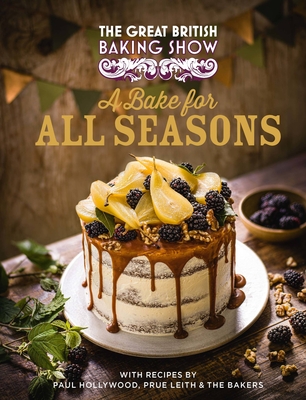 The Great British Baking Show: A Bake for All Seasons (Hardcover)


On Our Shelves Now
A Bake for All Seasons is The Great British Baking Show's Ode to Nature, packed with timely bakes lovingly created to showcase seasonal ingredients and draw inspiration from the changing moods and events of the year.

Whether you're looking to make the best of asparagus in spring, your prize strawberries in summer, pumpkin in autumn or blood oranges in winter, these recipes - from Prue, Paul, the Bake Off team and the 2021 bakers themselves - offer insight and inspiration throughout the year. From celebration cakes to traybakes, loaf cakes, and breads to pies, tarts and pastries, this book shows you how to make the very best of what each season has to offer.
The Great British Baking Show 2021 contains delicious recipes from throughout the series, with contributions from Paul Hollywood, Prue Leith and the series 12 bakers.

Paul Hollywood started his training as a baker aged twelve and then went to art college and trained as a sculptor. The love of working with his hands finally led him into creating new, unique and specialty breads full-time. He has worked as Head Baker at several renowned hotels and is the founder of the Hollywood Company Deli, which supplies his own breads to top London restaurants and supermarkets. Paul has recently appeared as a guest on 8 Out of 10 Cats, Lorraine and The Jonathan Ross Show. He has been a judge on The Great British Bake Off since 2010 as well as hosting his own BBC shows Paul Hollywood's Bread and Paul Hollywood's Pies & Puds.