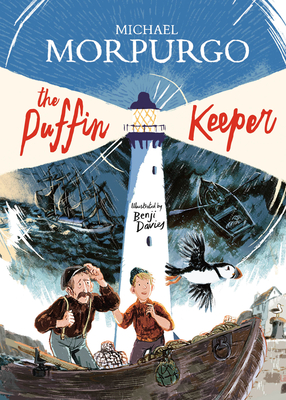 
On Our Shelves Now
From bestselling author Michael Morpurgo comes a beautifully illustrated classic story about a lighthouse keeper, a daring rescue and puffins, for fans of War Horse and The One and Only Ivan.

As a child, Allen is saved from a nautical disaster by Benjamin Postlethwaite, a solitary lighthouse keeper. Years later, Allen returns to the lighthouse, and the two nurse an injured young puffin back to health. When Allen is called up to fight in World War Two, he's not sure he'll see his mother or Benjamin again, but his fond memories of his time at the lighthouse keep him going, even through prison camp.

Allen and Ben's enduring friendship over the years is the basis for this story about friendship, art, war and an incredibly adorable puffin. From masterful storyteller Michael Morpurgo and world-class illustrator Benji Davies comes this truly beautiful tale which will enchant readers of all ages.
MICHAEL MORPURGO is one of Britain's best-loved storymakers. He has written over 150 books loved by readers around the world. His best-known work, War Horse, was adapted into a multi-Oscar-nominated film by Steven Spielberg and into a widely acclaimed play by the National Theatre. In 2003, Michael became the third Children's Laureate, a position he helped to create with the poet Ted Hughes. With his wife, he set up the charity Farms for City Children, and for their pioneering work they were both awarded the MBE in 1999. In 2017, he was awarded a knighthood for services to literature and charity.

BENJI DAVIES is an award-winning illustrator and author. Creator of the bestselling, acclaimed The Storm Whale, Grandad's Island and The Grotlyn, Benji's books have been co-editioned in over thirty-five languages and countries, gaining recognition worldwide. Benji is also the illustrator of the internationally successful Bizzy Bear board book series, which has topped three million sales globally.
“[I]n this winning story of an enduring friendship . . . Morpugo’s spare, deeply felt prose, with undercurrents of the otherworldly . . . creates an irresistible momentum for this elegant story of the sea and a destiny fulfilled.” —STARRED REVIEW, Publishers Weekly

"The Puffin Keeper is an emotional tale of people and creatures who forge joyful bonds, endure storms and carry on . . . Davies' depictions of human characters are nicely expressive, and the puffins are both accurate and adorable." —BookPage

“This is a grand adventure for young readers, boys and girls alike, but there are many moral lessons within like paying back someone who helped you.” —Story Monsters Ink

“Propelled by the sumptuous full-colour art of Benji Davies, The Puffin Keeper is a page turner young readers can finish curled up on the couch over one stormy afternoon.” —New York Times