The Boy and the Mountain (Hardcover) 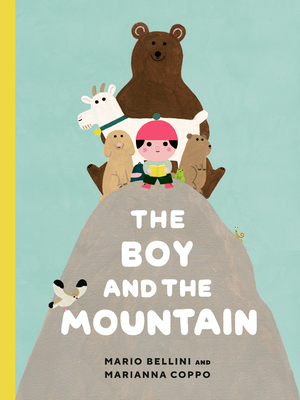 The Boy and the Mountain (Hardcover)


On Our Shelves Now
A boy sets off to draw a mountain in this thoughtful exploration of art and the creative process. For fans of Hike by Pete Oswald.

A little boy, who is a keen artist, becomes obsessed with a mountain he can see from his house. One day, he tries to draw the mountain, but his drawing doesn't look anything like it, so he decides that he has to take a closer look. He sets off with his dog, drawing what he sees along the way, and making a growing collection of animal companions during his hike. But when he finally reaches the mountain, the boy makes a discovery about the importance of perspective and friendship which changes how he views the world around him.

Both a powerful exploration of art and a sweet ode to hiking, this picture book from acclaimed author-illustrator Marianna Coppo and her partner, Mario Bellini, will inspire readers young and old to stop and take the time to appreciate both the world around them and others who inhabit it.
MARIANNA COPPO and her partner MARIO BELLINI are avid hikers who reside in Rome, Italy. Marianna is an author and illustrator who studied editorial illustration at MiMaster in Milan and now focuses on freelance illustration. Her debut picture book, Petra, received starred reviews from Kirkus, Publishers Weekly and Booklist, and was shortlisted for the Kate Greenaway Medal. She is also the creator of Ray, A Very Late Story, Such a Good Boy and, with author Daisy Bird, Whose Poo?. Her most recent book is Thingamabob.