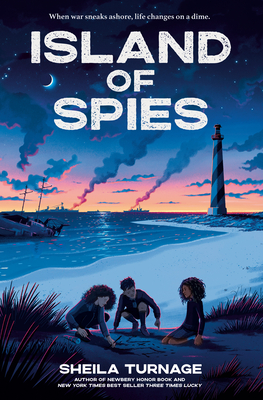 Twelve-year-old Stick Lawson lives on Hatteras Island, North Carolina, where life moves steady as the tides, and mysteries abound as long as you look really hard for them. Stick and her friends Rain and Neb are good at looking hard. They call themselves the Dime Novel Kids. And the only thing Stick wants more than a paying case for them to solve is the respect that comes with it. But on Hatteras, the tides are changing. World War II looms, curious newcomers have appeared on the small island, and in the waters off its shores, a wartime menace lurks that will upend Stick’s life and those of everyone she loves. The Dimes are about to face more mysteries than they ever could have wished for, and risk more than they ever could have imagined.

“Big, beautifully unfolding adventure and mystery, [and characters] who jump off the page and straight into your heart.” —Kimberly Willis Holt, author of National Book Award Winner When Zachary Beaver Came to Town

“Charming and funny, [abounding in] codes and clues, spies, and double agents. —PW

"Lively narration will quickly draw readers into the story, which twists and turns cleverly. —Booklist

“A little-known piece of American history [makes for] an entertaining saga of island life.” —Kirkus

“Stick is the kind of protagonist I wish was my best friend . . . . I can’t get enough of her.” —Gennifer Choldenko, author of Newbery Honor Book Al Capone Does My Shirts
Growing up in eastern North Carolina, Sheila Turnage fell in love with Hatteras Island's shipwrecks, secret World War II history, and whispered spy stories--which helped inspire Island of Spies. Sheila is the author of the award-winning Mo & Dale mysteries, including Three Times Lucky, a Newbery Honor Book, New York Times bestseller, and  Edgar Award finalist; The Ghosts of Tupelo Landing, also a New York Times bestseller and recipient of five starred reviews; and The Odds of Getting Even and The Law of Finders Keepers, both recipients of numerous starred reviews. Sheila is also the author of two nonfiction adult books, a poetry collection, and a picture book, Trout the Magnificent, illustrated by Janet Stevens. She lives on a farm in eastern NC with her husband, a very smart dog, a flock of chickens and guineas, one lonely goose, and a couple of sweet-faced goats. She still loves visiting Hatteras Island.

“The Dime Novel Kids are spunky, spirited, smart, sassy—and so is Sheila Turnage’s writing. It sizzles and sparkles. Turnage deftly weaves history with fiction, humor with drama, light with dark to produce a concoction as compelling as its protagonist. There are shades of Agatha Christie in this kaleidoscope of characters and clues. Kids will have a ton of fun when they visit Island of Spies.” —Lauren Wolk, author of Newbery Honor Book Wolf Hollow

“Turnage takes a little-known piece of American history and sets it solidly among realistic characters and an entertaining saga of island life.” —Kirkus Reviews

“Turnage’s clever 1942-set mystery [is as] charming and funny as the island setting, the kids’ antics, and the quirky cast. [Stick Lawson’s] passion for equality is depicted through her insistence that girls should be allowed to defend the island and her staunch defense of Rain, who experiences racism on the largely white island. [Amidst] codes and clues, spies and double agents . . . one message is made abundantly clear: “In times of danger, bet on each other.” —Publishers Weekly

"Turnage, who wrote the Newbery Honor Book Three Times Lucky, bases this historical novel on research into WWII [constructing a] mystery with many characters and motives for readers to consider. Stick’s lively narration will quickly draw readers into the story, which twists and turns cleverly before reaching its conclusion. —Booklist

“Stick and the Dime Novel Kids jump off the page and straight into your heart. Sheila Turnage is a master plotter, delivering big, beautifully unfolding adventure and mystery against an historical event. Her skilled use of humor, even in the most poignant moments, is enviable. Sometimes you can tell when a writer loved writing their story. Turnage must have had a heck of a great time!” —Kimberly Willis Holt, author of National Book Award Winner When Zachary Beaver Came to Town

"No mystery goes unsolved on Hatteras Island in 1942 because the Dime Novel Kids are always on the case. . . . The plot gently unfurls the island’s complex dynamics, [and] rather than just capitalizing on the aesthetic of the setting, [Turnage] address issues of race in both the treatment of biracial Rain on the island and allusions to immoral actions of the U.S. government." —BCCB

“Sheila Turnage is a master of voice. Stick is the kind of protagonist I wish was my best friend—she makes me laugh out loud, smile to myself, and wish I could sit next to her at lunch. I can’t get enough of her.” —Gennifer Choldenko, author of Newbery Honor Book Al Capone Does My Shirts