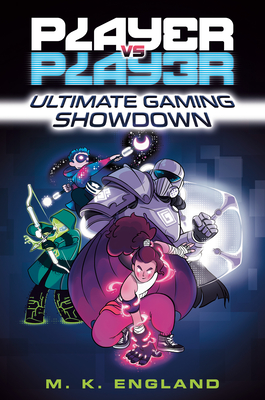 
On Our Shelves Now
In this action-packed illustrated series, four kid gamers meet at a virtual tournament and battle for the ultimate grand prize. Perfect for young fans of Ready Player One and Mr. Lemoncello's Library.

Sixty-four teams.
One mysterious grand prize.
Four gamers determined to win it all.

Welcome to Affinity, the hottest battle royale video game in the world! Gamers can be anything they want to be in Affinity’s high-tech, magical universe—and test their skills in fierce PvP combat. So when Hurricane Games announces an epic tournament with killer prizes, four kids form a team that feels unstoppable . . . but also maybe doomed from the start?

Josh is the tank . . . when his parents let him game.
Hannah is the melee fighter . . . but she can only play at the public library.
Larkin is the healer . . . as long as her family’s not around.
Wheatley is the ranger . . . with a secret that might wreck the whole team.

As solo gamers, they’re good. Really good. But the tournament is a whole new level of competition, and it'll take all four of them to bring it home. Can they step up their game in time for the final match?
M.K. England (they/them) grew up on the Space Coast of Florida watching shuttle launches from the backyard. These days, they call rural Virginia home, where there are many more cows but a tragic lack of rockets. In between marathon writing sessions, M.K. can be found drowning in fandom, rolling critical hits at the gaming table, digging in the garden, or feeding their video game addiction. They probably love Star Wars more than you do.

M.K. is the author of The Disasters, Spellhacker, The One True Me & You, and other forthcoming novels. Follow them at www.mkengland.com.

"Brightly funny, deeply relatable, and full of digital heart. . . . My gamer heart is full and ready for more. Now, where do I sign up to play Affinity myself?!" —Sean Easley, author of the internationally bestselling The Hotel Between series

"[An] ode to virtual gaming and real friendships. . . . A highly readable blend of gaming action and real-world problems." —Kirkus Reviews

"A thrill ride . . . a great selection for reluctant readers and dedicated gamers." —Booklist