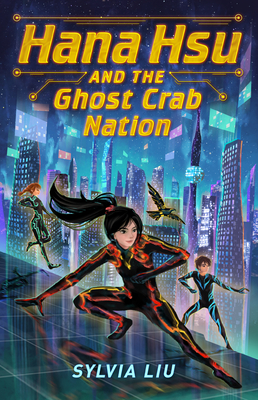 Perfect for fans of Dragon Pearl by Yoon Ha Lee, this thrilling, cinematic sci-fi novel follows Hana Hsu’s mission to save herself—and her friends—from a dangerous plot to control their minds.

If she can beat out half her classmates at Start-Up, a tech school for the city’s most talented twelve-year-olds, she’ll be meshed to the multiweb through a neural implant like her mom and sister. But the competition is fierce, and when her passion for tinkering with bots gets her mixed up with dangerous junkyard rebels, she knows her future in the program is at risk.

Even scarier, she starts to notice that something’s not right at Start-Up—some of her friends are getting sick, and no matter what she does, her tech never seems to work right. With an ominous warning from her grandmother about being meshed, Hana begins to wonder if getting the implant early is really a good idea.

Desperate to figure out what’s going on, Hana and her friends find themselves spying on one of the most powerful corporations in the country—and the answers about the mystery at Start-Up could be closer to home than Hana’s willing to accept. Will she be able to save her friends—and herself— from a conspiracy that threatens everything she knows?
Sylvia Liu grew up with books and daydreams in Caracas, Venezuela. Once an environmental attorney protecting the oceans, she now spins stories for children, inspired by high tech, ghost crabs, and strong girls. Sylvia lives in Virginia with her family and a very fluffy cat. Find Sylvia on Twitter @artsylliu.

“Exciting and suspenseful! Sylvia Liu’s twisty sci-fi debut will have readers rooting for Hana and turning pages until the satisfying end.” –Tae Keller, Newbery Award winner and New York Times bestselling author of When You Trap a Tiger

“A spellbinding sci-fi adventure full of twists and turns, readers will be rooting for Hana Hsu from start to finish.” –Katie Zhao, author of Last Gamer Standing, the Dragon Warrior series, and the Winnie Zeng series

“Sylvia Liu has crafted a wonderfully scrappy heroine to root for in Hana, paired with immersively charming world-building that could give Pixar a run for its money.” –Andrea Tang, author of Rebelwing and Renegade Flight

"A high octane, sci-fi adventure with big ideas—middle grade readers won’t be able to put it down." –School Library Journal

"This smart science-fiction thriller envisions a technologically advanced future America in which Chinese culture plays a prominent role and which is still grappling with concerns like climate change, classism, and monopolies. In addition to these larger timely issues, Hana navigates complex family dynamics and burgeoning friendships in this layered work that invites critical questioning of reliance on technology. A suspenseful glimpse into a dystopian America dominated by technology." –Kirkus Reviews

"Liu’s plotting and characters shine as Hana and her friends unravel Start-Up’s less than savory mysteries. A high-stakes tale." –Booklist