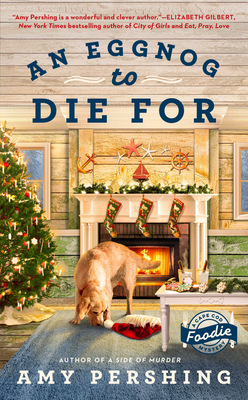 This is book number 2 in the A Cape Cod Foodie Mystery series.

Christmas is coming to Cape Cod, but when Sam Barnes finds a very dead Santa in a very hip restaurant, it’s up to her to sift out suspects who have been naughty vs. nice….

Professional foodie Samantha Barnes has a simple Christmas list: a quiet holiday at home with her dog and a certain handsome harbor master; no embarrassing viral videos; and no finding dead bodies. Unfortunately she’s got family visiting, she’s spending a lot of time in front of the camera, and she’s just stumbled over the lifeless body of the town’s Santa Claus.

Plus, Sam’s plans for Christmas Eve are getting complicated.  There’s the great eggnog debate among her very opinionated guests.  There’s the “all edible” Christmas tree to decorate.  And there’s her Feast of the Five Fishes prepare. Nonetheless, Sam finds herself once again in the role of sleuth. She needs to find out who slayed this Santa—but can she pull off a perfect feast and nab a killer?
Amy Pershing, who spent every summer of her childhood on Cape Cod, was an editor, a restaurant reviewer and a journalist before sitting down to write the Cape Cod Foodie Mystery series, including A Side of Murder -- which Elizabeth Gilbert called “the freshest, funniest mystery I have ever read” -- and An Eggnog to Die For  -- which Kirkus Reviews gave a starred review, saying, "A delightful sleuth, a complex mystery, and lovingly described cuisine: a winner for both foodies and mystery mavens." The third book in the series, Murder Is No Picnic, will be published in the summer of 2022.

“This is one of the freshest, funniest murder mysteries I’ve ever read. I fell absolutely in love with Samantha Barnes — the brave, sarcastic,crime-solving, relatable heroine we’ve all been waiting for. A SIDE OF MURDER is a rich, satisfying meal that delights from beginning to end, and Amy Pershing is wonderful and clever author.”—Elizabeth Gilbert, New York Times bestselling author of City of Girls and Eat, Pray, Love

"A delicious mystery lovingly set in Cape Cod featuring a cast of charming characters. Amy Pershing writes with a fresh fun voice that will delight cozy fans. Chef turned restaurant critic, Samantha Barnes, proves a clever sleuth whose helpful cooking tips will be a big hit with culinary readers."—Krista Davis, New York Times bestselling author of The Dog Who Knew Too Much

"An exquisite Cape Cod setting, a shamed but resilient chef, murderous secrets, and a long-buried but still steaming romance...Amy Pershing's debut mystery will leave you longing for a seaside vacation, complete with fried clams and the next book in her charming series."-- Lucy Burdette, national bestselling author of The Key Lime Crime

"A delightful sleuth, a complex mystery, and lovingly described cuisine: a winner for both foodies and mystery mavens."--Kirkus Reviews (starred review)