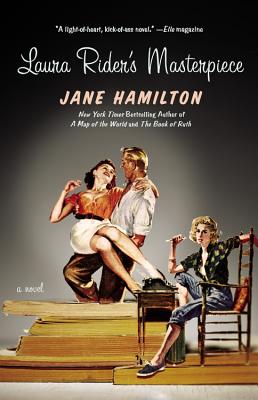 
On Our Shelves Now
Laura and Charlie Rider have been married for twelve years. They share their nursery business in rural Wisconsin, their love for their animals, and their zeal for storytelling. Although Charlie's enthusiasm in the bedroom has worn Laura out, although she no longer sleeps with him, they are happy enough going along in their routine.

Jenna Faroli is the host of a popular radio show, and in Laura's mind is "the single most famous person in the Town of Dover." When Jenna happens to cross Charlie's path one day, and they begin an e-mail correspondence, Laura cannot resist using Charlie to try out her new writing skills. Together, Laura and Charlie craft florid, strangely intimate messages that entice Jenna in an unexpected way. The "project" quickly spins out of control. The lines between Laura's words and Charlie's feelings are blurred and complicated, Jenna is transformed in ways that deeply disturb her, and Laura is transformed in her mind's eye into an artist. The transformations are hilarious and poignant, and for Laura Rider, beyond her wildest expectations.
Jane Hamilton's novels have won literary prizes, been made into films, and become international bestsellers; and two of them, The Book of Ruth and A Map of the World, were selections of Oprah's Book Club. Her nonfiction has appeared in the New York Times; Washington Post; Allure; O, The Oprah Magazine; Elle; and various anthologies. She's married to an apple farmer and lives in Wisconsin.