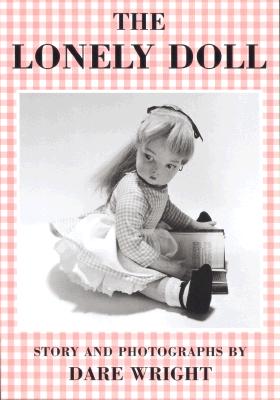 Once there was a little doll. Her name was Edith. She lived in a nice house and had everything she needed except someone to play with. She was lonely! Then one morning Edith looked into the garden and there stood two bears! Since it was first published in 1957, The Lonely Doll has established itself as a unique children's classic. Through innovative photography Dare Wright brings the world of dolls to life and entertains us with much more than just a story. Edith, the star of the show, is a doll from Wright's childhood, and Wright selected the bear family with the help of her brother. With simple poses and wonderful expressions, the cast of characters is vividly brought to life to tell a story of friendship.

Dare Wright was born in Canada and raised in the United States. She started her career as a photographer's fashion model, then went around to the other side of the camera and became a highly successful freelance photographer. Her photographs appeared in such magazines as TOWN AND COUNTRY, GOOD HOUSEKEEPING, VOGUE, and HARPER'S BAZAAR. She created several books about Edith and her friends, including the classic favorites The Lonely Doll and Edith and Mr. Bear.