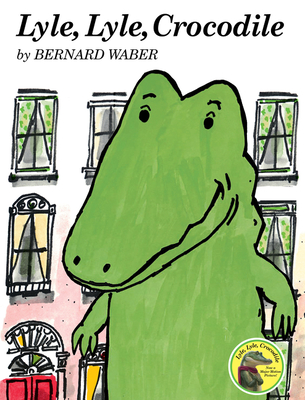 Everyone in the neighborhood loves Lyle the crocodile—except for a cranky neighbor and his nervous cat! Can lovable Lyle make everything right with his grumpy neighbors? A beloved classic read-aloud—now a major motion picture!

Lyle the crocodile lives in a house on East 88th Street in New York City. Lyle enjoys helping the Primm family with everyday chores, and playing with the neighborhood kids.

He’s the happiest crocodile any home ever had…until one neighbor insists that Lyle belongs in a zoo! Mr. Grumps and his cat, Loretta, don't like crocodiles, and everything Lyle does to win them over seems to go wrong.

It will take all of Lyle’s charm—and courage—to reveal the hero, and friend, behind the big, crocodile smile.

Bernard Waber was the beloved author-illustrator of more than thirty picture books, including Courage, Ira Sleeps Over, and Do You See a Mouse? With the publication of The House on East 88th Street in 1962, his Lyle, Lyle Crocodile series of books became a mainstay of children's literature and was adapted for both stage and screen. A Literary Landmark plaque commemorating the adventures of this endearing New York City reptile can now be found on East 88th Street. bernardwaber.com.

"Lyle is as lovable as ever and the story and colored pictures as nonsensical." Booklist, ALA —