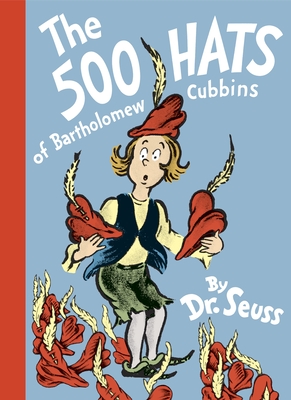 As topical today as when it was first published in 1938, The 500 Hats of Bartholomew Cubbins is the story of a young boy (the same one featured in the Caldecott Honor Award-winner Bartholomew and the Oobleck) and his unjust treatment at the hands of a king. Written in unrhymed prose, The 500 Hats is one of Dr. Seuss's earliest works, and while it may not be as well-known as his other stories, the book addresses subjects that we know the good doctor was passionate about throughout his life: the abuse of power (as in Yertle the Turtle and Horton Hears a Who); rivalry (as in The Sneetches); and of course, zany good humor (as in The Cat in the Hat and all the other books he wrote and illustrated)!
Theodor Seuss Geisel—aka Dr. Seuss—is one of the most beloved children’s book authors of all time. From The Cat in the Hat to Oh, the Places You’ll Go!, his iconic characters, stories, and art style have been a lasting influence on generations of children and adults. The books he wrote and illustrated under the name Dr. Seuss (and others that he wrote but did not illustrate, including some under the pseudonyms Theo. LeSieg and Rosetta Stone) have been translated into 45 languages. Hundreds of millions of copies have found their way into homes and hearts around the world. Dr. Seuss’s long list of awards includes Caldecott Honors, the Pulitzer Prize, and eight honorary doctorates. Works based on his original stories have won three Oscars, three Emmys, three Grammys, and a Peabody.

"A lovely bit of tom-foolery which keeps up the suspense and surprise until the last page."--The New York Times.