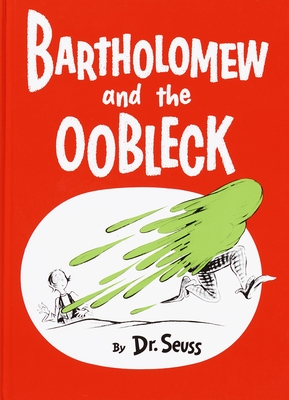 Join Bartholomew Cubbins in Dr. Seuss’s Caldecott Honor–winning picture book about a king’s magical mishap! Bored with rain, sunshine, fog, and snow, King Derwin of Didd summons his royal magicians to create something new and exciting to fall from the sky. What he gets is a storm of sticky green goo called Oobleck—which soon wreaks havock all over his kingdom! But with the assistance of the wise page boy Bartholomew, the king (along with young readers) learns that the simplest words can sometimes solve the stickiest problems.

Theodor Seuss Geisel—aka Dr. Seuss—is one of the most beloved children’s book authors of all time. From The Cat in the Hat to Oh, the Places You’ll Go!, his iconic characters, stories, and art style have been a lasting influence on generations of children and adults. The books he wrote and illustrated under the name Dr. Seuss (and others that he wrote but did not illustrate, including some under the pseudonyms Theo. LeSieg and Rosetta Stone) have been translated into 45 languages. Hundreds of millions of copies have found their way into homes and hearts around the world. Dr. Seuss’s long list of awards includes Caldecott Honors, the Pulitzer Prize, and eight honorary doctorates. Works based on his original stories have won three Oscars, three Emmys, three Grammys, and a Peabody.