The Milk Street Cookbook: The Definitive Guide to the New Home Cooking, Featuring Every Recipe from Every Episode of the TV Show, 2017-2021 (Hardcover) 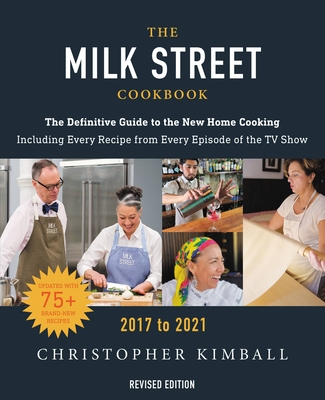 The Milk Street Cookbook: The Definitive Guide to the New Home Cooking, Featuring Every Recipe from Every Episode of the TV Show, 2017-2021 (Hardcover)


Unavailable
The complete Milk Street TV show cookbook, featuring each dish from every episode and more -- nearly 400 dishes in all, including 65+ new recipes from the 2020-2021 fourth season. Christopher Kimball's James Beard and Emmy Award-winning Milk Street TV show and cookbooks give home cooks a simpler, bolder, healthier way to eat and cook. Now featuring nearly 400 tried-and-true recipes, including every recipe from every episode of the TV show, this book is the ultimate guide to high-quality, low effort cooking and the perfect kitchen companion for cooks of all skill levels.  At Milk Street, there are no long lists of hard-to-find ingredients, strange cookware, or all day methods. Instead, every recipe has been adapted and tested for home cooks like you. You'll find simple recipes that deliver big flavors and textures fast, such as:Organized by type of dish -- from salads, soups, grains, and vegetable sides to simple dinners and extraordinary desserts -- this book is an indispensable reference that will introduce you to extraordinary new flavors and ingenious techniques.
Christopher Kimball's Milk Street is located in downtown Boston — at 177 Milk Street — and is home to a cooking school, a bimonthly magazine, and public television and radio shows. They are the authors of Milk Street: The New Home Cooking, Milk Street: Tuesday Nights, which won both the IACP and James Beard Awards for General Cooking, and Milk Street: The New Rules.