The Rest Is Noise: Listening to the Twentieth Century (Paperback) 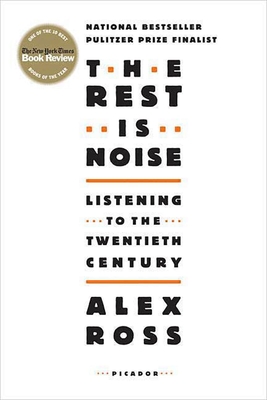 The Rest Is Noise: Listening to the Twentieth Century (Paperback)

In this sweeping and dramatic narrative, Alex Ross, music critic for The New Yorker, weaves together the histories of the twentieth century and its music, from Vienna before the First World War to Paris in the twenties; from Hitler's Germany and Stalin's Russia to downtown New York in the sixties and seventies up to the present. Taking readers into the labyrinth of modern style, Ross draws revelatory connections between the century's most influential composers and the wider culture. The Rest Is Noise is an astonishing history of the twentieth century as told through its music.

Alex Ross has been the music critic of The New Yorker since 1996. His first book, the international bestseller The Rest Is Noise: Listening to the Twentieth Century, was a finalist for the Pulitzer Prize and won a National Book Critics Circle Award. His second book, the essay collection Listen to This, received an ASCAP Deems Taylor Award. He was named a MacArthur Fellow in 2008 and a Guggenheim Fellow in 2015.

“The Rest Is Noise is a great achievement. Rilke once wrote of how he learned to stand 'more seeingly' in front of certain paintings. Ross enables us to listen more hearingly.” —Geoff Dyer, The New York Times Book Review

“Ross is a surpremely gifted writer who brings together the political and technological richness of the world inside the magic circle of the concert hall, so that each illuminates the other.” —Lev Grossman, Time

“It would be hard to imagine a better guide to the maelstrom of recent music than Mr. Ross, who worked on this book for a decade. He has an almost uncanny gift for putting music into words.” —The Economist

“The Rest Is Noise is a long and thrilling ride. . . . [Ross] writes about music in vivid language humming with intelligence. He tells great stories about musicians' lives and illuminates their work with the light of his own experiences.” —Kevin Berger, Salon.com

“The best book on what music is about--really about--that you or I will ever own.” —Alan Rich, LA Weekly