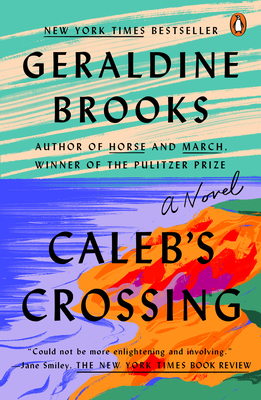 “Caleb's Crossing reveals how early pioneers and native inhabitants of what is now Martha's Vineyard were capable of intense friendship and a sharing of spiritual beliefs despite dissimilar backgrounds. Employing the language of the time, Brooks once again proves her prowess in this story of the education of the first Native American to graduate from Harvard College. Caleb, the son of a chieftain, faces criticism from his own people as well as from white society. The narrator, Bethia Mayfield, desires the same education as Caleb but is denied due to her sex. The two become lifelong friends and their story is an emotional and evocative look at a crossing of cultures.”
— Karen Briggs, Great Northern Books and Hobbies, Oscoda, MI

A bestselling tale of passion and belief, magic and adventure from the author of The Secret Chord and of March, winner of the Pulitzer Prize.

Bethia Mayfield is a restless and curious young woman growing up in Martha's vineyard in the 1660s amid a small band of pioneering English Puritans. At age twelve, she meets Caleb, the young son of a chieftain, and the two forge a secret bond that draws each into the alien world of the other. Bethia's father is a Calvinist minister who seeks to convert the native Wampanoag, and Caleb becomes a prize in the contest between old ways and new, eventually becoming the first Native American graduate of Harvard College. Inspired by a true story and narrated by the irresistible Bethia, Caleb’s Crossing brilliantly captures the triumphs and turmoil of two brave, openhearted spirits who risk everything in a search for knowledge at a time of superstition and ignorance.
Geraldine Brooks is the author of five novels: the Pulitzer Prize-winning March; the international bestsellers Caleb's Crossing, People of the Book, and Year of Wonders; and, most recently, The Secret Chord. She has also written the acclaimed nonfiction works Nine Parts of Desire and Foreign Correspondence. Born and raised in Australia, she lives on Martha's Vinyard with her husband, the author Tony Horwitz, and their two sons.

“Caleb’s Crossing could not be more enlightening and involving.  Beautifully written from beginning to end, it reconfirms Geraldine Brooks’s reputation as one of our most supple and involving novelists.” —Jane Smiley, The New York Times Book Review

“Brooks filters the early colonial era through the eyes of a minister’s daughter growing up on the island known today as Martha’s Vineyard…[Bethia’s] voice – rendered by Brooks with exacting attention to the language and rhythm of the seventeenth century – is captivatingly true to her time.” —The New Yorker

“A dazzling act of the imagination. . .Brooks takes the few known facts about the real Caleb, and builds them into a beautifully realized and thoroughly readable tale…this is intimate historical fiction, observing even the most acute sufferings and smallest heroic gestures in the context of major events.” —Matthew Gilbert, The Boston Globe

“In Bethia, Geraldine Brooks has created a multidimensional, inspiring yet unpredictable character…Bethia’s forbearance, her quiet insistence, the way she creates her life using the best of whatever is handed to her, puts the struggles of American women today in perspective.” —Susan Salter Reynolds, The Los Angeles Times

“Original and compelling. . .[Brooks’ characters] struggle every waking moment with spiritual questions that are as real and unending as the punishing New England winters.”—Paul Chaat Smith, The Washington Post