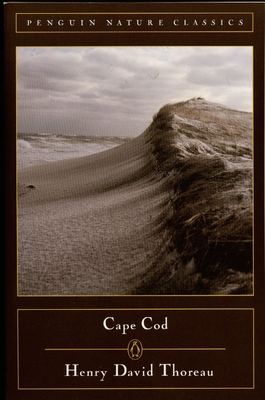 
On Our Shelves Now
Thoreau's classic account of his meditative, beach-combing walking trips to Cape Cod in the early 1850s, reflecting on the elemental forces of the sea, with an introduction by Paul Theroux

Cape Cod chronicles Henry David Thoreau’s journey of discovery along this evocative stretch of Massachusetts coastline, during which time he came to understand the complex relationship between the sea and the shore. He spent his nights in lighthouses, in fishing huts, and on isolated farms. He passed his days wandering the beaches, where he observed the wide variety of life and death offered up by the ocean. Through these observations, Thoreau discovered that the only way to truly know the sea—its depth, its wildness, and the natural life it contained—was to study it from the shore. Like his most famous work, Walden, Cape Cod is full of Thoreau’s unique perceptions and precise descriptions. But it is also full of his own joy and wonder at having stumbled across a new frontier so close to home, where a man may stand and “put all America behind him.”

Part of the Penguin Nature Library edited by Edward Hoagland

For more than seventy years, Penguin has been the leading publisher of classic literature in the English-speaking world. With more than 1,700 titles, Penguin Classics represents a global bookshelf of the best works throughout history and across genres and disciplines. Readers trust the series to provide authoritative texts enhanced by introductions and notes by distinguished scholars and contemporary authors, as well as up-to-date translations by award-winning translators.
Henry David Thoreau was born in Concord, Massachusetts in 1817. He graduated from Harvard in 1837, the same year he began his lifelong Journal. Inspired by Ralph Waldo Emerson, Thoreau became a key member of the Transcendentalist movement that included Margaret Fuller and Bronson Alcott. The Transcendentalists' faith in nature was tested by Thoreau between 1845 and 1847 when he lived for twenty-six months in a homemade hut at Walden Pond. While living at Walden, Thoreau worked on the two books published during his lifetime: Walden (1854) and A Week on the Concord and Merrimack Rivers (1849). Several of his other works, including The Maine Woods, Cape Cod, and Excursions, were published posthumously. Thoreau died in Concord, at the age of forty-four, in 1862.

Paul Theroux, an internationally acclaimed travel writer, is also the author of over two dozen novels and works of non-fiction. He divides his time between Cape Cod and the Hawaiian Islands.