This Is Going to Hurt [TV Tie-in]: Secret Diaries of a Young Doctor (Paperback) 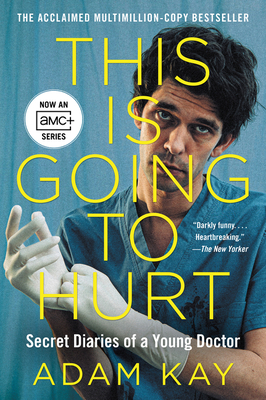 This Is Going to Hurt [TV Tie-in]: Secret Diaries of a Young Doctor (Paperback)

The acclaimed multimillion-copy bestseller, This Is Going to Hurt is Adam Kay’s equally "blisteringly funny" (Boston Globe) and “heartbreaking” (New Yorker) secret diaries of his years as a young doctor.

Welcome to 97-hour weeks. Welcome to life and death decisions. Welcome to a constant tsunami of bodily fluids. Welcome to earning less than the hospital parking meter. Wave goodbye to your friends and relationships. Welcome to the life of a first-year doctor.

Scribbled in secret after endless days, sleepless nights, and missed weekends, comedian and former medical resident Adam Kay’s This Is Going to Hurt provides a no-holds-barred account of his time on the front lines of medicine.

Hilarious, horrifying, and heartbreaking by turns, this is everything you wanted to know—and more than a few things you didn’t—about life on and off the hospital ward.

And yes, it may leave a scar.

Adam Kay is an award-winning comedian and writer for TV and film. He previously worked for many years as a doctor. His first book, This Is Going to Hurt, spent more than a year at #1 on the Sunday Times bestseller list and has sold 2.5 million copies worldwide. It will be a major new comedy-drama for AMC (BBC in UK), for which Kay is the creator, writer, and executive producer. He lives in Oxfordshire, England.

"Hilarious and heartbreaking. ...I howled, yelped, and occasionally choked with laughter. ...This book may hurt, but in an important and necessary way." — Cathy Rentzenbrink, The Times (London), “Humour Book of the Year”

“It's so hilarious. It's so irreverent, both about himself, the patients, the doctors in charge of him, that I think I laughed on every page.”  — Kristan Higgins, Entertainment Weekly

"So clinically funny and politically important that it should be given out on prescription." — The Guardian

"Brilliant. Five stars. Amazing." — Mark Haddon, bestselling author of The Curious Incident of the Dog in the Night-Time

"Painfully funny. The pain and the funniness somehow add up to something entirely good, entirely noble, and entirely lovable." — Stephen Fry, actor, comedian, and author of Mythos