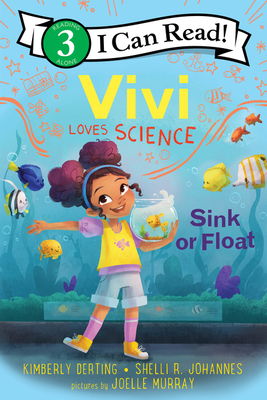 Vivi loves science! In this STEM-themed Level 3 I Can Read! title, Vivi and her friends visit the aquarium and are introduced to the concepts of density and buoyancy. A great choice for aspiring scientists, emerging readers, and fans of Andrea Beaty’s Ada Twist, Scientist. Includes activities, a glossary, and a fun experiment to do at home.

Vivi loves science—and experimenting! In this Level 3 I Can Read! title, Vivi and her classmates visit an aquarium and learn about the creatures living in the big display tank. But why do some fish swim while others bury themselves in the sand? Vivi will have to experiment to find out!

The Loves Science books introduce readers to girls who love science, as well as basic concepts of science, technology, engineering, and math. This Level 3 I Can Read! explores swimming, sinking, floating, and density, and includes an experiment to try at home. A great pick for newly independent readers and an ideal companion to Cece Loves Science: Push and Pull and Libby Loves Science: Mix and Measure.

Kimberly Derting is the author of the Cece Loves Science series, the Body Finder series, the Pledge trilogy, and the Taking series. She lives in the Pacific Northwest, where the gloomy weather is ideal for writing anything dark and creepy. Her three beautiful (and often mouthy) children serve as an endless source of inspiration and frequently find things they say buried in the pages of their mother’s books. You can visit her online at www.kimberlyderting.com.

Shelli R. Johannes is coauthor of nine books in the Loves Science series (co/Kimberly Derting), Theo Thesaurus series, Shine Like a Unicorn, and Penny: An Engineering Tale of the Fourth Pig (Capstone, Fall 2022).

She is also the critically-acclaimed author of teen novels (written as SR Johannes) including the Nature of Grace series (Untraceable, Uncontrollable, and Unstoppable), Rewired, and On the Bright Side.

She can often be found on highways and country roads saving strays and other jaywalking critters, or volunteering with animal conservation groups like the Atlanta Zoo, the Dolphin Project, and Bosley’s puppy orphanage. After earning a master’s in marketing and working as an executive in Corporate America, Shelli traded out her heels and suits for flip-flops and jeans so she could follow her passion of writing.

She lives in Atlanta with her pack of animals: a British husband, two kids, one bird, one fish, and two crazy Goldendoodles who hate vegetables.