The Orphans of Race Point: A Novel (Paperback) 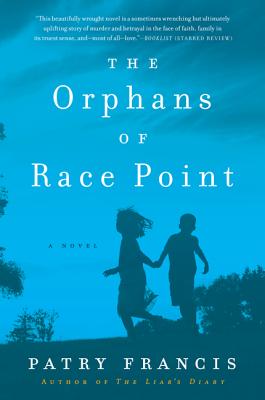 The Orphans of Race Point: A Novel (Paperback)

“Set against the coast of Provincetown, Patry Francis’s fierce, ravishing epic cuts deep to the bone about how love binds us together and breaks us apart, and how the past’s thumbprint rests on the present. Tender, violent, and alive, it’s also unforgettable.” — Caroline Leavitt, New York Times-bestselling author of Pictures of You

Set on Cape Cod, Massachusetts, a suspenseful page-turning saga of love, murder, and the true meaning of faith from the author of the acclaimed The Liar’s Diary.

Set in the close-knit Portuguese community of Provincetown, Massachusetts, The Orphans of Race Point traces the relationship between Hallie Costa and Gus Silva, who meet as children in the wake of a terrible crime that leaves Gus parentless. Their friendship evolves into an enduring and passionate love that will ask more of them than they ever imagined.

On the night of their high school prom, a terrible tragedy devastates their relationship and profoundly alters the course of their lives. And when, a decade later, Gus—now a priest—becomes entangled with a distraught woman named Ava and her daughter Mila, troubled souls who bring back vivid memories of his own damaged past, the unthinkable happens: he is charged with murder. Can Hallie save the man she’s never stopped loving, by not only freeing him from prison but also—finally—the curse of his past?

Told in alternating voices, The Orphans of Race Point illuminates the transformative power of love and the myriad ways we find meaning in our lives.

Patry Francis was the author of All the Children Are Home, The Orphans of Race Point and The Liar’s Diary, as well as the blog “100 Days of Discipline for Writers.” Her short stories and poetry appeared in the Tampa Review, Antioch Review, Colorado Review, Ontario Review, and American Poetry Review, among other publications. She was a three-time nominee for the Pushcart Prize and twice the recipient of the Mass Cultural Council grant.

“Stretching over more than three decades, it’s a gripping tale of stubborn love, the legacy of domestic violence, and the family secrets children keep. A noir element crops up, too.” — Boston Globe

“Set against the coast of Provincetown, Patry Francis’s fierce, ravishing epic cuts deep to the bone about how love binds us together and breaks us apart, and how the past’s thumbprint rests on the present. Tender, violent, and alive, it’s also unforgettable.” — Caroline Leavitt, New York Times-bestselling author of Pictures of You

“Patry Francis has written the sort of sprawling, Dickensian novel that readers long for in this post-modern age….The Orphans of Race Point has a breakneck pace, engaging characters, and a vividly rendered setting.” — Providence Journal

“A Dickensian story….Its themes of passionate treachery and abiding love play out in sometimes heartbreaking ways. Recommend to readers wondering what to read after The Goldfinch.” — Library Journal (starred review)

"This beautifully wrought novel is a sometimes wrenching but ultimately uplifting story of murder and betrayal in the face of faith, family in its truest sense, and—most of all—love.” — Booklist (starred review)

“This talented author engages our emotions and her descriptions are impeccable, and moving…it’s a joy to read a novel that’s expertly crafted right to the very end — Barnstable Patriot

“A sweeping family drama with its inherent mysteries and secrets…readers will be absorbed by the tragedies that push the story along, and the often engaging voice.” — Romantic Times

“In The Orphans of Race Point, Patry Francis has poured a lifetime of wisdom into a thrilling, twisting plot, which holds up the human heart as a prism, turning it to show its many facets, its shadows and light.” — Susan Henderson, author of Up from the Blue

“Stunning psychological suspense which poses the eternal question: how well can you know the people you love? This is riveting, bite-your-nails reading and the arrival of a great new talent.” — Lee Child on The Liar's Diary

“A twisting ride full of dangerous curves and jaw-dropping surprises. This is one of my favorite reads of the year!” — Tess Gerritsen on The Liar's Diary

“Twists and turns but never lets go.” — Jacquelyn Mitchard on The Liar's Diary

“Genuinely creepy . . . The unlikely friendship between a small-town school secretary and a flamboyant teacher proves deadly in this psychological murder mystery.” — Kirkus Reviews on The Liar's Diary

“A quirky, well-written and well-constructed mystery with an edge.” — Publishers Weekly on The Liar's Diary