The Widow's War: A Novel (Paperback) 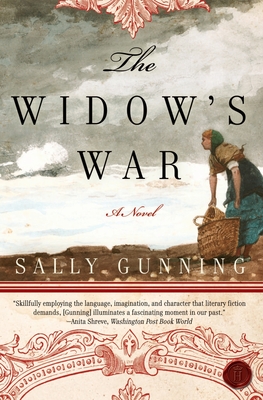 The Widow's War: A Novel (Paperback)

The Red Tent meets The Scarlett Letter in this haunting historical novel set in a colonial New England whaling village.

“When was it that the sense of trouble grew to fear, the fear to certainty? When she sat down to another solitary supper of bread and beer and picked cucumber? When she heard the second sounding of the geese? Or had she known that morning when she stepped outside and felt the wind? Might as well say she knew it when Edward took his first whaling trip to the Canada River, or when they married, or when, as a young girl, she stood on the beach and watched Edward bring about his father’s boat in the Point of Rock Channel. Whatever its begetting, when Edward’s cousin Shubael Hopkins and his wife Betsey came through the door, they brought her no new grief, but an old acquaintance.”

When Lyddie Berry’s husband is lost in a storm at sea, she finds that her status as a widow is vastly changed from that of respectable married woman. Now she is the “dependent” of her nearest male relative—her son-in-law. Refusing to bow to societal pressure that demands she cede everything that she and her husband worked for, Lyddie becomes an outcast from family, friends, and neighbors—yet ultimately discovers a deeper sense of self and, unexpectedly, love.

Evocative and stunningly assured, The Widow’s War is an unforgettable work of literary magic, a spellbinding tale from a gifted talent.

Sally Cabot Gunning lives in Brewster, Massachusetts, with her husband, Tom. A lifelong resident of New England, she is active in local historical organizations and creates tours that showcase the three-hundred-year history of her village. She is the author of three “Satucket novels” (The Widow’s War, Bound, and The Rebellion of Jane Clarke), as well as the historical novels Benjamin Franklin’s Bastard and Monticello.

“Readers will be swiftly turning the pages, eagerly cheering for the strong-willed widow.” — Booklist

“Heartrending ... Gunning’s vibrant portrayal of Lyddie’s journey shows that the pursuit of happiness is not for the faint of heart.” — Boston Globe