Cheaper by the Dozen (Paperback) 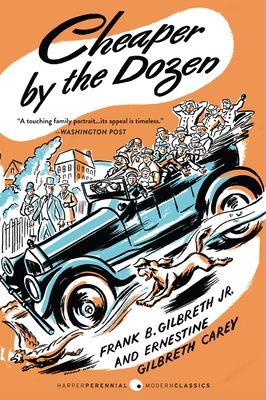 Cheaper by the Dozen (Paperback)

“A touching family portrait that also happens to be very, very funny. . . its appeal is timeless.” —Jonathan Yardley, Washington Post

One of the best-loved American memoirs of an oversized family and the parents who held them together - now a Disney+ movie starring Gabrielle Union and Zach Braff.

What do you get when you put twelve lively kids together with a father—a famous efficiency expert—who believes families can run like factories, and a mother who is his partner in everything except discipline? You get a hilarious tale of growing up that has made generations of kids and adults alike laugh along with the Gilbreths in Cheaper by the Dozen.

Translated into more than fifty-three languages and made into numerous films over the years — including a classic film starring Myrna Loy and a cult favorite with Steve Martin, Hilary Duff, and Alyson Stoner — this memoir is a delightfully enduring story of family life at the turn of the twentieth century.

Frank B. Gilbreth Jr. was born in 1911 in Plainfield, New Jersey, and graduated from the University of Michigan. He became a lieutenant commander in the U.S. Navy during World War II and received a Bronze Star and Air Medal. In 1947, he joined the staff of what is now the Post and Courier in Charleston, South Carolina. A columnist and reporter, he authored and coauthored several books, including Belles on Their Toes (with Ernestine Gilbreth Carey), How to Be a Father, and Time Out for Happiness. In 1950, he was corecipient (with his sister) of the French International Humor Award for Cheaper by the Dozen. He died in 2001.

Ernestine Gilbreth Carey was born in 1908 in New York City and graduated as an English major from Smith College. In 1930, soon after graduation, she began fourteen years of New York City department store buying and management. Meanwhile, she married and had two children. A writer and lecturer, she has authored and coauthored seven books, including Belles on Their Toes (with Frank Gilbreth Jr.), Jumping jupiter, Rings Around Us, and Giddy Moment. In 1950 she was corecipient (with her brother) of the French International Humor Award for Cheaper by the Dozen. She lives in Reedley, California.

“Gay and lighthearted...One of the most amusing books.” — Chicago Sun-Times